Defender, Avenger and Champion
The Sanctuary Series, Volumes One through Three 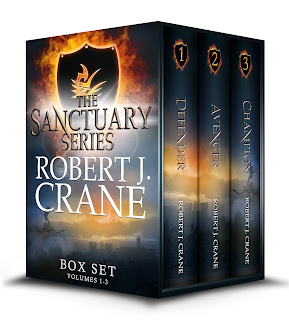 This is a collection of the first three titles in the Sanctuary Series, which is about a warrior in the mythical world of Arkaria, facing great battles against magical and fantastical foes. (Approx. 357,000 words or 950 pages total.)

Cyrus Davidon leads a small guild in the human capital of Reikonos. Caught in an untenable situation, facing death in the den of a dragon, they are saved by the brave fighters of Sanctuary who offer an invitation filled with the promise of greater adventure. Soon Cyrus is embroiled in a mystery - someone is stealing weapons of nearly unlimited power for an unknown purpose, and Sanctuary may be the only thing that stands between the world of Arkaria and total destruction.

When a series of attacks on convoys draws suspicion that Sanctuary is involved, Cyrus Davidon must put aside his personal struggles and try to find the raiders. As the attacks worsen, Cyrus and his comrades find themselves abandoned by their allies, surrounded by enemies, facing the end of Sanctuary and a war that will consume their world.

As the war heats up in Arkaria, Vara is forced to flee after an ancient order of skilled assassins infiltrates Sanctuary and targets her. Cyrus Davidon accompanies her home to the elven city of Termina and the two of them become embroiled in a mystery that will shake the very foundations of the Elven Kingdom – and Arkaria.

Additional Books not included in set (in best reading order):