Lies in the Dark

Lies in the Dark
Liars and Vampires
Book 4 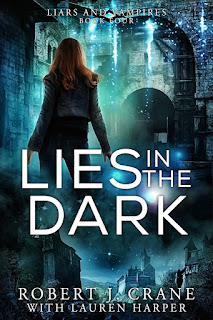 
Cassie Howell is a recovering compulsive liar, is on permanent grounding by her parents, has a boyfriend who's a vampire, and has just gotten into a car wreck in said boyfriend's limo while she was supposed to be at home.

How could things get worse? Well, she could get dragged into the magical land of faerie, where nobody is who they seem, and where everybody has a lie to tell. Now Cassie is trapped by court intrigue in a land where liars reign so supreme they might just make her look like an amateur at lying. What's a girl to do when everyone around you is so busy telling their own lies that nobody seems to know what the truth even is?

And how can Cassie possibly get home?