Her Lying Days Are Done

Her Lying Days Are Done
Liars and Vampires
Book 5 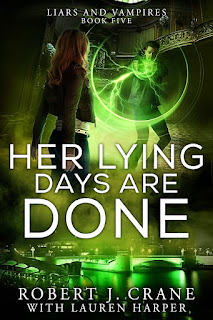 (Paperbacks available on Amazon in EU)

Cassie Howell, high school student, recovering compulsive liar, has just decided to tell the truth in all things, from now on. Starting with telling her parents that her boyfriend is a hundred year-old plus vampire.

How could that possibly go wrong?

Well, for starters, the vampire lord of Tampa could track her back to her house and set fire to it with Cassie, her boyfriend and her family all still inside, chatting. And then, it could turn out that the only reason he found Cassie is because her oldest friend in the world, Jacquelyn (now a vampire, long story) has betrayed her.

Caught between the truth and lies, between her own strength and an unrelenting evil, who will come out ahead?