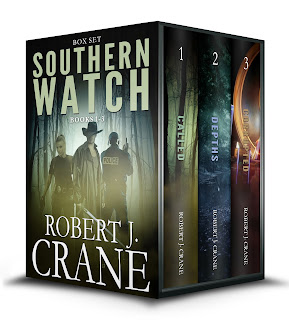 Amazon US!
Amazon UK!
Amazon CA!
Amazon AU!
WARNING: Due to disturbing content, this series is intended for MATURE AUDIENCES ONLY.
Called
Archibald "Arch" Stan was a local cop in Midian, Tennessee that was good at his job. Lafayette Hendricks is a drifter, a broken-down hitchhiker blown through Midian on the prevailing winds. When Arch catches him in a fight on the town square, though, things start to get weird, fast, because the guy he's fighting doesn't die when he gets shot.
Pretty soon, Arch's whole life is turned upside down by Hendricks's revelation that there's a secret world operating under the one he's been living in his whole life - one filled with demons, chaos, and unspeakable evils.

Depths
When a string of savage and horrific murders committed by demons shocks the town, the unsuspecting Sheriff's Department scrambles to track down the culprit. Their investigation leads them on a twisting path that sends them up against the forces of hell and may even cost them their lives. Because a new demon has come to Midian, one that has a taste for death...and he may not leave the town standing when he's done.

Corrupted
A carnival comes to Midian in the wake of the ever-deepening apocalypse, leaving Arch Stan and Lafayette Hendricks with another problem – a demon that intends to leave the town in ashes.


This is a collection of the first three titles in the Southern Watch Series, which is about a town in the throes of a demon invasion and the people who fight against the tide of evil. (Approx. 286,000 words or 762 pages total.)