Limitless, In the Wind and Ruthless

Limitless, In the Wind and Ruthless
The Girl in the Box 11-13
(Out of the Box Books One through Three) 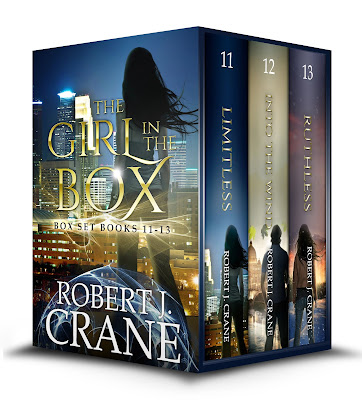 This is a collection of the first three titles in The Out of the Box Series, which are about a woman with a troubled past who develops powers far beyond those of a normal human, and her battles against those who would use their abilities to harm others. (Approx. 250,000 words total.)

Two years after the explosive Girl in the Box Series ends, Sienna Nealon is called to London, England, where she is drawn into a murder investigation involving an old friend. Paired up with a young, handsome Detective Inspector, she finds herself in a race against time to unravel the mystery surrounding the murder as victim after victim falls to the careful, clever killer. Soon, Sienna is in a race against time to find the culprit before he sets loose a plan that will show Sienna the limits of her abilities in the most brutal way imaginable.

Reed Treston is a man without purpose. His war is over, his friends have left and now he runs a lonely watch with his sister, policing people with powers beyond those of normal humans. When the government intercepts a message that has links to his past, Reed finds himself stirred into action. His path leads him across continents and through countless lies, to a city he has not seen in years – Rome, Italy – and a confrontation with a threat that could destroy a nation.


AUDIOBOOK - IN THE WIND

When a mission in New York City goes terribly wrong, Sienna Nealon finds herself replaced as head of the government agency in charge of policing people with powers beyond those of a normal human. Marginalized, humiliated, she ponders her place in the world now that her war is over. But it isn't long before another threat rears its ugly head, and Sienna finds herself outmatched and outgunned – against former prisoners bent on executing a scheme which will push Sienna past limits of ruthlessness even she could not imagine.